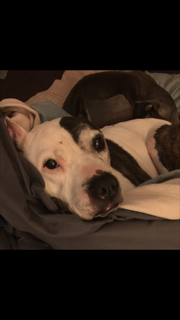 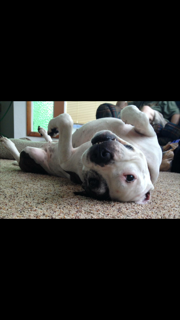 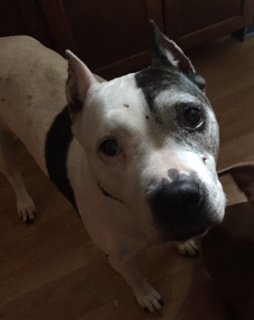 Her eyes; those are the first thing I saw that drew me in. She was huddled underneath my co-workers desk, too scared to be placed in a kennel. I wasn’t looking for a new companion, but I feel like often those are the best connections that occur in life.

I took her home that night, to “foster”… I think knowing deep down that same night that she wouldn’t be going back to the shelter.

A few weeks later we got her spayed, I remember it was the day before Thanksgiving. Thanksgiving morning I woke up, put Piper and her sister outside, calling them both back in a few minutes later. When Piper didn’t run to the door with her sister, I knew something was wrong. After an emergency trip to the vet, it was discovered that Piper was bleeding internally and the vet’s akita was brought in to donate blood. I told Piper while she was laying on that table that if she made it through this, she would never have to worry about finding another home. She was home.

I was blessed to have Piper in my life for over 12 years, but it was not long enough. The joy she brought into my life, the protection she brought to my home, the silly antics and laughs she provided I will keep in my heart forever.

I was so incredibly fortunate to have found my soul mate on four legs. Today marks 7 months since I had to let her go, due to an unknown tumor that had taken over her spleen. That day, I again looked into those same eyes on March 25th of this year, and told her it was ok, she could let go and I would see her again.

The pain hasn’t decreased very much, but I do now find myself looking at other dogs needing rescue, into their eyes especially, waiting for her to return.

I miss you Piper. You were the best friend on four legs I have ever had.

Share Your Memory of
Piper
Upload Your Memory View All Memories
Be the first to upload a memory!
Share A Memory
Plant a Tree