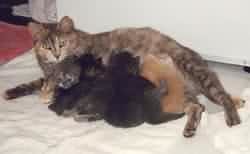 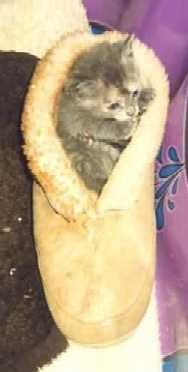 The diluted calico cat showed up on our porch in the spring of 1997. One of my roommates began feeding her regularly, and go figure, she decided to stay! We named her Josie and had house rules that she had to stay outside. As our time with Josie progressed, we realized that she was becoming quite round; finally facing the fact that this poor little kitty has not been spayed. This created quite the dilemma when we really hadn't planned on having a cat, much less several!!! And babies to boot!!! As time for Josie's delivery progressed, our hearts just could not force her to stay outside to bring those babies into a cold wet world---so, our laundry room became her new warm and cozy home!!! Then, one weekend, Josie blessed us with most beautiful seven baby kittens of various colors. She was an awesome mother, constantly caring for them and chasing off human intruders with her cranky attitude and sharp teeth! We enjoyed watching the kittens grow and mature, interacting with their mother. Three weeks after the births, Josie became very ill with a mammary infection. A few days after surgery and medication, she finally was returning to her loving, but cranky old self! But her good health was short lived, as only a day later, she again became very ill. She was rushed to an emergency veterinarian who kept her overnight with an IV, with plans to determine her illness the following day. Unfortunately, our Josie did not make it through the night. We had seven four-week old kittens and half of them could not feed themselves. So we became the surrogate parents, feeding, cleaning, and litter-training the babies.

Sharing in Josie's life in this manner gave us the desire to keep her legacy in our home. So we chose to keep the smallest, busiest, cutest, baby of the litter, our little Josie (named after her mother). Little Josie (also referred to as Josibella, bellies, bells and Jos) has added such energy and love to our home. She is now four years old and still keeping the "legend" of her mother alive!

To plant a beautiful memorial tree in memory of Josie Cat, please visit our Tree Store

Share Your Memory of
Josie
Upload Your Memory View All Memories
Be the first to upload a memory!
Share A Memory
Plant a Tree