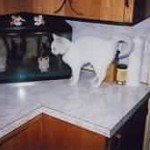 Our daughter found Skeeter on the street. On a cold spring day in March of 91. Skeeter's was just a baby kitten. She joined our family of nine people and six cats. Everyone fell in love with her. Our other cat James became Skeeter's special friend. The two of them spent hours and hours grooming each other, playing, and sleeping with each other. We always said that they were like boyfriend and girlfriend.

We called Skeeter's our "blonde" because she was such an airhead. She fell off of furniture, got stuck in the cupboards, and meowed when her dish was half-empty. Skeeter was a quiet and very loving cat who always greeted our guests and family members with love and affection.

When our four year old granddaughter Shelby~Elizabeth became old enough Skeeter's became "her cat" Shelby spent many hours holding her and took naps with her. Shelby would like to send a message to Skeeter saying "Skeeter you are my special friend and I am very sad that you are gone. I will miss you forever and I love you very much."

After twelve years our precious James Crossed the rainbow bridge. He died on April 7, 2001. Sadly only one week later Skeeter developed a liver failure, and also crossed over. Our granddaughter says it is because Skeeter did not want James to be alone.

Skeeter we love you and we miss you, Take care of James for us.

James is survived by his human companions